As I’ve mentioned before, one of the most rewarding parts of my residency has been connecting with other Scottish artists working in many different genres. At first glance, the work of some may seem far removed from the daily life of a 200 year old watermill, but uncovering areas of  commonality is always a challenge and a joy.

Stephen Watt is a Scottish poet and spoken word artist. He is the author of the poetry collections Spit (Bonacia, 2012) and Optograms (Wild Word Press, 2016), Dumbarton FC Poet-in-Residence, and several-time slam poet winner. I met Stephen at that fine festival of crime, Bloody Scotland, when we were both selected to take part in this year’s ‘Crime in the Spotlight’ programme; a series of mini-events designed to showcase the talents of the next generation of crime writers. I think it’s fair to say that both Stephen and myself have quite tenuous links to crime. Our literary interest lies more with dark deeds, perhaps, and the psychology of evil. The similarities in our work became apparent when I listened to his latest opus.

Stephen is one half of Neon Poltergeist, a Gothic-inspired collaboration with sound engineer Gareth McNicol. Their recently-released EP is an alchemy of spoken word, eerie music and chilling sound effects. The poems are an often-disturbing exploration of some dark characters, both historic and modern, including John Sage (‘Dragfoot’), the torturer of Edward Longshanks; Edward Mordrake, cursed with a second face on the back of his head, and the Moors Murderer, Ian Brady.

The EP’s title, 55.862670 -4.231142 (and I had to ask!) are the coordinates for the Glasgow Necropolis. This struck an immediate chord with me, because it locates these haunting words to a specific site; renders the content a kind of Gothic geo-poetry. It also ties in very neatly with the themes of folklore, location and the land that I’ve been exploring throughout my residency.

For me, this EP is an exciting concept, opening up new avenues of collaboration in terms of the mill landscape and its legends.Throughout the coming months, I will be conducting research into traditional mill poetry and the ballad tradition. The fusion of traditional words with a modern sound is an interesting one, and  the creak and grind of the machinery in the mill has been used on several occasions as a backdrop to  musical and spoken word events. I think Barry Mill would certainly lend itself to Neon Poltergeist’s bold new interpretation of traditional forms!

In the meantime, click here to listen to ‘Edward Mordrake’…but not with the lights off… 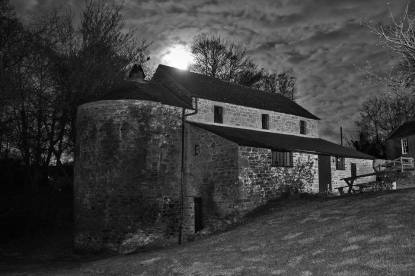